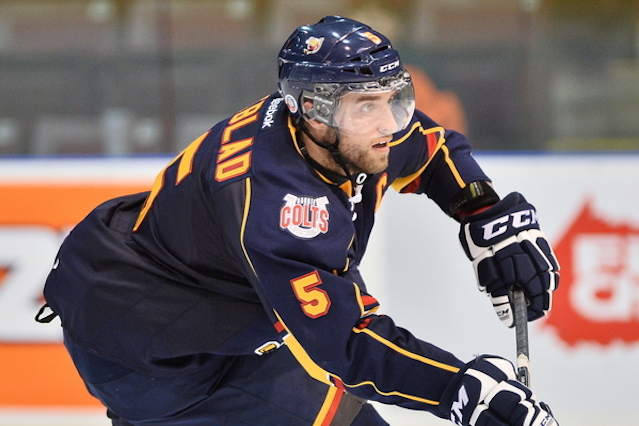 HockeyProspect.com has released their latest Top 30 2014 NHL Draft prospects rankings.  They have a new number one ranked player this month. Aaron Ekblad moves up from being our 2nd ranked player to take over the top spot in our rankings. Sam Reinhart falls from #1 to #2 overall.

Another change in our top 10 group is Nikolaj Ehlers moving from #11 overall, to #7 overall.  The Halifax Mooseheads forward has had a steady rise up our rankings each month.

A big mover this month is Brendan Perlini of the Niagara IceDogs. We had several viewings of Perlini since our last rankings release and he had some very impressive performances. Perlini showed us more willingness to compete in traffic or the dirty areas on the ice. It was one of the areas of his game that we really hoped to see improvement. Perlini has always stood out with his skating, but in our more recent viewings he has played bigger, using his size and reach to his advantage. In our earlier viewings this season, Perlini had not flashed the puck protecting abilities that he showed us he is capable of during our games attended since our last rankings release.

Overall, there was not all that much movement this month, although two players did move into our top 30.

Jayce Hawryluk makes his first appearance in our top 30 player rankings. After lurking just outside our list since September, Hawryluk played his way onto our list this month.

Jake Virtanen moves back into our top 30 after slipping out of it on our December list.

Next month we expand our list for our subscribers. We will rank our top 60 NHL Draft eligible prospects on our February list.

Be sure to listen in to an upcoming episode of NHL Network Radio’s Hockey Prospects show on Sirius XM where  Director of Scouting, Mark Edwards, will be a guest to discuss this current NHL Draft Top 30 list.