The two-round draft will take place online with the order of selection rotating through each of the CHL’s three leagues using an inverse order of final regular season standings within each league from the 2013-14 season.  The OHL’s Sarnia Sting hold the number one pick, followed by the Quebec Remparts who acquired the second overall selection following a 2012 trade with the Sherbrooke Phoenix.  The WHL’s Lethbridge Hurricanes will select third overall.  Each team in the CHL is permitted to dress and play a maximum of two import players each season who are selected annually through the CHL Import Draft.

For information on numerous players who may be selected you can take advantage of a 24 hour sale on our 2014 NHL Draft Black Book. Click here to purchase via instant download. 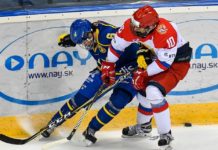