Once again this year we attended the NHL Combine. This year the combine was relocated to Buffalo and the improvements were obvious.

The testing floor moved from a hotel to a rink, the new Harbor Center which sits beside the Sabres home arena. NHL staff and media could sit in the spectator seats and get a good view of the testing.

Jack Eichel impressed in the testing, so did Barrie Colts goaltender, Mackenzie Blackwood. We watched Blackwood jump off the mat in the standing long jump (118.9). Also impressive in the long jump was Brendan Guhle who actually bettered Blackwood’s jump at an even 122 inches. Austin Wagner came in at 115.4 inches. Players ranked at the bottom in the long jump were Filip Ahl (85.4) Daniel Vladar (83.5) David Kase (81.1) and Anthony Beauvillier (83.9). 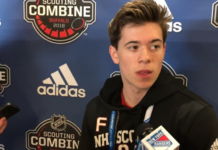