The final segment of the Sirius NHL Radio 2017 NHL Draft Preview show concludes the discussion of HockeyProspect.com’s Top 31 prospects for the 2017 NHL Draft which gets rolling Friday night in Chicago. HP’s Mark Edwards finishes up his discussion with show hosts Shane Malloy and Russ Cohen.

Players included in this segment are: 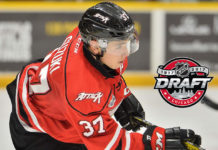