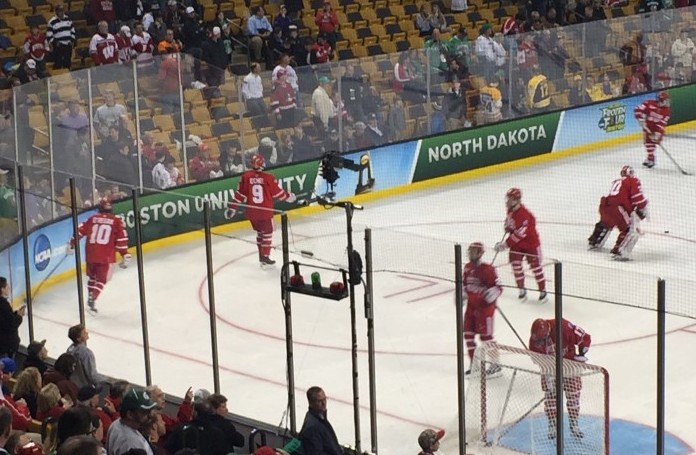 I have watched him a few times live this year and each time you think boy Diffley did not jump off the page at me though he makes steady plays. He shows good positioning in the defensive zone, limits opponents chances, makes smart outlets, and like the anticipation skills to break plays up. He keeps it simple and strength is making good puck decisions. He also skates well so another asset. Diffley will not light the score sheet up though will chip in with a few helpers with his vision and sound puck movement. He picked up two assists on the night by simply moving the puck. They He is a sleeper type still just starting to hit the radar as late bloomer type. (NHL Draft Eligible)

Like Connor McDavid you can only say so much on Eichel because everything has been said, especially since watching him since age 15. Again he was the best player on the ice for his team. He started the scoring on the night with power play goal in the 1st period as he collected a rebound in the slot area by right hash marks and he easily backhanded the puck into the open net as the goalie was down and out of the play. It wasn’t an extraordinary goal just the fact he sat patient in the open ice and the puck came to him. Again his skating stride is exceptional and you like how he covers a vast amount of ice without the puck. So he is very effectively defensively and sometimes doesn’t get enough credit as will angle opponents out on the backcheck and will utilize his long reach effectively in passing lanes. He sees the ice very well as he anticipates plays with and without the puck. Eichel made a beautiful pass in the 2nd period on BU’s 3rd goal. As he came onto the ice he took a pass, then entered the zone on his off-wing. While everybody thought Eichel would shoot, he feed a across ice pass to the top of circle to #26 Greer for the one-time goal. He then was put on the ice at the end of the game when his team clung onto 1-goal lead. He iced the win as he patiently watch battle develop along the wall and then got puck and fired into the empty net just inside his own blue line. Again Eichel is an elite player with all the skill sets and hockey IQ to go along. (NHL Draft Eligible)

He has made good progression through the season as was once a 4th winger in the beginning yet earned 2nd line duties in this Frozen Four semi-final game. He is decent size and has good strength. He worked hard on the forecheck as not afraid to get dirty in the corners and along the wall. The skill sets and stick skills are average though he can shoot the puck. He displayed this asset as he nicely one-timed a #9 Eichel pass at the top of the circle placed with great accuracy. He will need to continue improving on the foot speed for the next level. You like the progress trend over the last year and sure one team will take a late round flyer on the forward. (NHL Draft Eligible)