Later today the 2020 CHL Top Prospects game will take place in Hamilton, Ontario. Once again this year we are releasing our January rankings as a lead up to puck drop.

Alexis Lafrenière remains at the top of 2020 NHL Draft rankings. Over the Christmas break, the talented winger showed the hockey world why he has been so highly touted these past few years. His play on the big stage of the World Junior tournament is exactly what Team Canada had hoped it would be, as he helped lead them to a gold medal in the Czech Republic.

The race for the second spot on our ranking was a tight battle between Quinton Byfield and Tim Stützle. On our ranking back in November, Stützle was 5th overall on our list, he moves up two spots to 3rd overall this month, with Byfield remaining in the second spot on our list. Tim Stützle is once again joined by fellow German, John-Jason Peterka, who moves from 18th overall in November to 14th overall on our mid-term ranking. A third player who calls Germany home, Lukas Reichel, is also in our top 31 this month.

Jack Quinn started the season 30th overall on our September list and moved up to 19th in November. This month he is rising once agin all the way to 11th overall. Quinn recently scored his 30th goal in 38 games so far this season. Quinn is joined by his teammate, Marco Rossi who moved from 12th in November to 8th overall this month. Rossi has posted huge numbers this season, he now has 26 goals and 48 assists for 74 points in just 32 games. 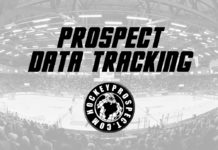 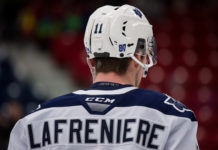 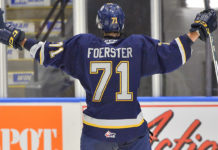