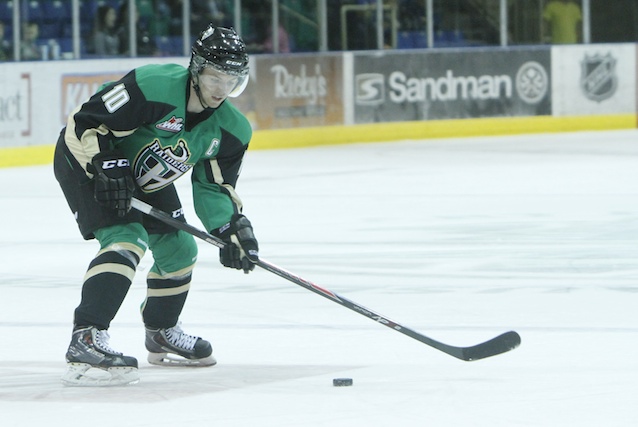 Once again, Morrissey is posting big numbers for his Prince Albert Raiders this season. After posting 47 points in his draft year last season, Morrissey has already chalked up 13 goals and 35 points in 29 games so far this season.

Morrissey is a poised, puck moving defenseman who has quarterbacked the power play for Prince Albert for the last 2 seasons. He has a solid overall game, and while he may not be the biggest player, he will catch opponents with their head down in the neutral zone whenever he gets the opportunity. No matter how much pressure Morrissey may face when he has the puck, he always seems to find a way to either calmly skate it out of trouble, or quickly spin away from an opponent and make a laser beam, tape to tape pass to his forward to start the attack. He possesses very impressive vision on the point, and time and time again seems to be able to make difficult passes and threads the needle to go cross ice for good scoring chances. Not only does he have elite passing ability, he is able to read the play quickly and take advantage of any mistakes opponents make or be creative with the puck. He has a good shot from the point that he could use more. He walks the line with ease, and keeps his head up to unleash his shot when he sees an open lane, or to make a pass if an opponent cheats to t!ake his shot away.

Defensively, Morrissey gives opponents very little room to work with. His skating abilities allow him to cover a large area, and his gap control is excellent off the rush. He has a good stick to knock away passes and to take away passing lanes. He does not chase the play, and looks calm under pressure. He also forces opponents to keep their head up and enter the neutral zone with caution because of his ability to step up and land good open ice hits. He quickly sees an opportunity to dish out a hit, and closes the gap in a hurry. The one area of improvement for Morrissey would be his strength. He has a hard time maintaining body position against bigger opponents in the slot, and may have a hard time t!ying up bigger and physically mature players at the pro level.

Morrissey’s consistent level of excellence on the ice could allow his name to be called in the first round of the NHL Entry Draft. It is rare to find a defenseman of his age who is can make such an impact with the puck while not sacrificing his defensive game at all. Teams will have to wait a few years until he could be ready to play in the NHL, but with the proper development, Morrissey can s!urely turn into a valuable top 4 defenseman one day.

Quotable: “I saw him shut down more than one top line in my viewings. That’s a nice addition to his offense.” – NHL Scout

Quotable: “I have been a fan of Morrissey since the U17 in Windsor. More recently, I liked him at the U18 in Sochi. We dropped him slightly since our last ranking in February. I wanted to see him win a few more battles physically to show more potential in that area of his game. I had a phone conversation with Josh earlier this season and he was one of the more impressive prospects I have spoken to over the years.” – Mark Edwards