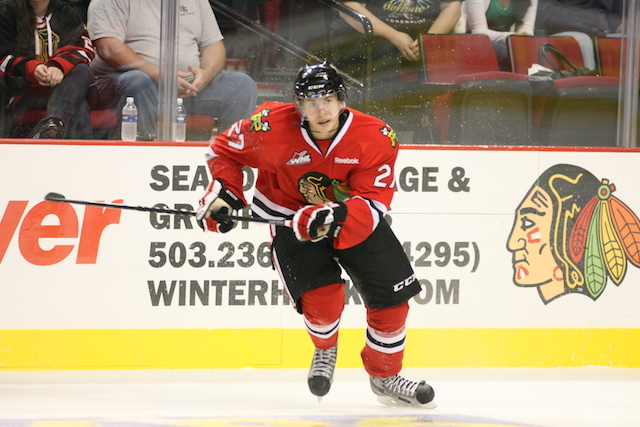 Oliver Bjorkstrand was selected in the 3rd round by the Columbus Blue Jackets. We had him ranked as an early second rounder, so we obviously liked the pick. Bjorkstrand scored 31 goals as a rookie for the Portland Winterhawks and after 40 games so far this season he already has 27 goals and 59 points. He is tied for 4th in the WHL scoring race as of January 11, 2014.

Bjorkstrand recently competed for Denmark in the division 1A U20 World Championship alongside 2014 NHL Draft prospect Nikolaj Ehlers. Bjorkstrand had 4 goals and 2 assists in 5  games for Denmark. He helped Denmark in it’s quest to be promoted to compete in the 2015 World Jr Championship hosted by Montreal and Toronto.

Bjorkstrand came into the league as an import forward and quickly adjusted to the North American style of play. He mostly played on the 3rd line on a very deep team, but was able to make a good impact consistently and gave teams a nightmare in terms of matching lines every game. The first thing you notice about Bjorkstrand is that he plays bigger than his size. He is very good along the boards and drives to the net hard. He may not be involved in many scrums after the whistles, but whenever he is out on the ice, he gives his full effort in tough areas. Another strength of Bjorkstrand is his skating abilities. He is so tough to tie up along the wall because he can make quick tight turns with the puck and buy his line mates some time to get open. He has very impressive acceleration and opponents have a difficult time keeping him to the outside. Offensively, Bjorkstrand has very good overall skill. He possesses a good touch around the net, and a quick release. He positions himself well everywhere out on the ice, and constantly moves into open areas to receive passes. He is a good playmaker himself, and sees the ice quite well. Defensively, Bjorkstrand works hard in his own end without the puck, but still has work to do in regards to positioning. He has a tendency to lose track of his point man, and has a difficult time getting into shooting lanes and taking away passes as a result.

Quotable: “I liked him when I saw him last year and I have been impressed with him this season. The kid has an NHL release and he has impressed me with his compete level all over the ice. I like his scoring upside at the next level.” – Mark Edwards

Quotable: “This kid will score a ton next season with Rattie gone.” – NHL scout