SNB #55 Luke Green RD (2016): Played on the 2nd pairing with Jakub Zboril and saw power play time as well during the game. Used his good footwork to skate the puck out and moved the puck well in the transition game. He was more active in the 2nd half of the game offensively, with two solid scoring chances late in the game to tie the game.

SNB #23 Oliver Felixson LD (2016): Did a good job on the PK, using his reach and size to block shots and passing lanes. His decision-making with the puck was a bit slow, didn’t get many chances to touch the puck, though.

SNB #10 Nathan Noel C (2016): Played a solid game, working hard at both end of the ice. Got into a fight on his first shift of the game and made good use of his speed in puck pursuit. He rushed the puck in the offensive zone with good speed and took the puck to the net. He scored a nice goal at the end of the game.

SNB #7 Kyle Ward RW (2016): Threw some good hits on the forecheck. Was strong on his skates. His skating stride is average. Worked hard and was used on the PK.

DRU #4 Benjamin Gagne LD (2017): The left-shooting defenseman played on the right side tonight. Gagne has good footwork that helps him skate pucks out and get out of trouble. He got beaten easily one-on-one by Noel late in the 3rd period for Saint John’s 2nd goal.

DRU #22 Mathieu Sevigny LW (2016): He didn’t do much offensively during the game, outside of a scoring chance in the first period where he was a bit slow releasing his shot which gave the goaltender the opportunity to move over to make the save. He played well on the PK and threw some good hits during the game. 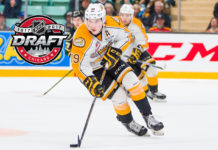