Home International Hockey
Photo JC Pinheiro, Hockey Canada Images
Team Quebec vs. Team USA – Dec 31USA opened the game as heavy favorites against the home province, but neither team really came out with too much offense. This was in large part due to the goaltending efforts of both Julio Billia and Chris Birdsall. Billia was tested much more often than Birdsall. He made some excellent pad saves early, one of which was nothing short of spectacular. Then at the other end Birdsall flashed his glove hand on a couple occasions gaining applause from the Quebec faithful on one particular save. Eventually it was Jack Eichel who solved Billia banging home a puck in the slot for an early 1-0 lead. USA dominated the shot clock in the first at a total of 14-4. Jack Eichel took a very hard but clean hit from behind the net. He was shaken up and took a few moments to come off the ice.[sociallocker]


Jack Eichel opened the second period by playing a few shifts but then left once again, this time for the remainder of the game. In the second period, Billia took over where he left off stopping several shots as the American team put up another 14 shots. However just after the midway point of the game, with USA still leading only 1-0 they seemed to crack Billia a little. They managed to score twice in less than three minutes to open up a 3-0 lead. Thanks to Ryan MacInnis slipping one in, then Austin Poganski scored an outstanding goal beating the defenseman then the goaltender with his hands and skill. Shortly after Nicolas Aube-Kubel who made a great move right off the draw, then put the puck behind Birdsall.

Quebec looked to be opportunistic in the third period and mount a comeback but Team USA did an excellent job keeping Quebec pinned for the vast majority of the period outshooting Quebec 19-2 in the period. Again Billia kept Quebec in the game, but just past the midway mark of the period Ryan Bliss showed great patience with the puck then scored to make it 4-1. Chris Wilkie who had an excellent game wrapped it all up with a goal as he showed his hands and patience cutting into the slot and unleashing a laser to make the score 5-1. That would be the final of this game.

HockeyProspect.com 3 Stars of the Game

#16 – Nicolas Aube-Kubel – Team Quebec
Quebec only put one goal up on the board, but they had a decent number of chances. Thanks in large part to the play of Aube-Kubel. He was relentless on the forecheck forcing turnovers and finishing his hits on a regular basis. Aube-Kubel showed good creativity and intelligence in the offensive zone and was a potential game changer before USA took over the game.

#51 – Chris Wilkie – Team USA
Chris Wilkie was a key part in Team USA’s 5-1 win over Quebec today. He pressured the puck carrier relentlessly in the offensive zone and was able to create offensive chances for his team and put the puck on net with a fairly powerful shot. Playing on a line with Jack Eichel, Chris has fallen into the background a bit, but with Eichel’s injury, Wilkie really stepped up and dictated the play on his line

#39 – Dylan Larkin – Team USA
Larkin got off to a bit of a slow start against Ontario in this tournament, but really showed his true potential against Quebec tonight. Dylan showed off tremendous skating ability and was absolutely flying all over the ice all game long. Larkin handles the puck very well in traffic and protects it well along the boards. He is smart on the rush with the puck and shows the awrness to know when to pass it up and when to carry it into the zone. 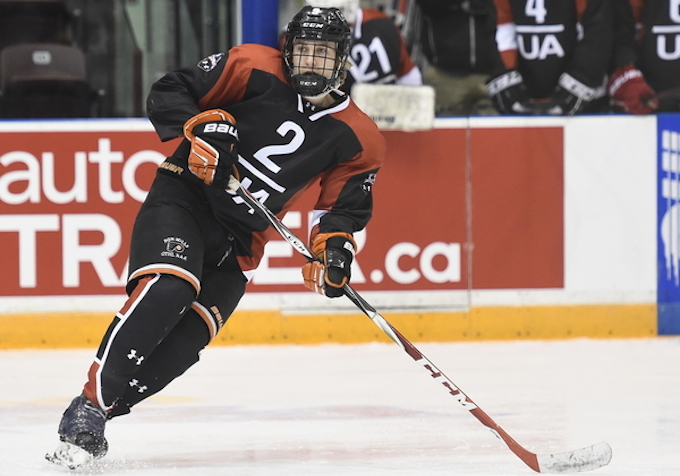