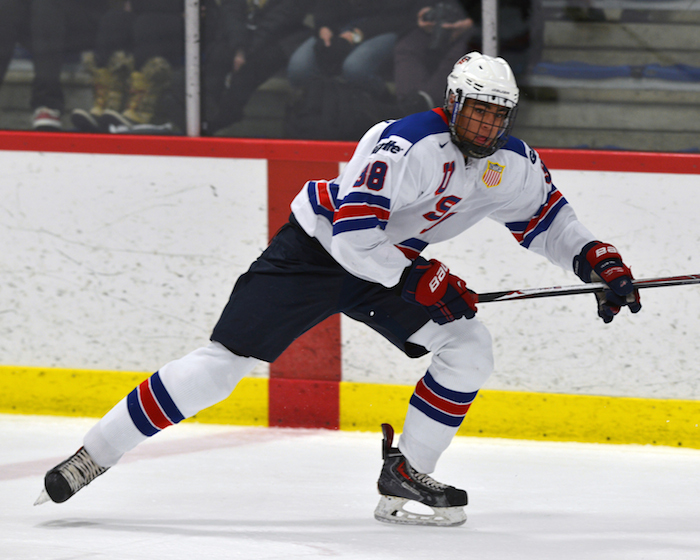 Our Intern, Angela Salerno, continues with her series of interviews with NHL Draft prospects with an interview with the USNTDP Jordan Greenway.

You have previously played for the prestigious Shattuck St. Mary’s, how was your experience there?

It was unbelievable, honestly. I think I can give them a lot of credit for what they did for me. On the hockey side I think that they contributed to a lot of the success that I’ve had in my career so far. I can just say the best about Shattuck. They’re a great program there, the structure’s great. On the schooling side of things, it was challenging but we were able to get it done with some of the teachers that they had on the staff with us to help us out and everything like that. Ultimately I think they were great and I can never thank them enough for what they’ve done. Every time someone talks about it now I can honestly say that I miss that place more than I thought I would when I was gonna leave. It was a great experience.

Your younger brother also plays for the Development Program, what kind of advice do you give him?

He went to Shattuck with me, so for the most part he’s followed my path. It’s sort of an honour just to know that your brother looks up to you like that. Coming into the program all I said was its a process. There’s ups and downs this year and next year and you just got to work hard and get through it. I think he knew that I had high expectations for him. Honestly he’s done everything and some of what I expected and I never thought I’d see my younger brother as good as he is now. He’s come along way since even being at Shattuck and it’s been a great experience to see him grow every day.

Do you guys train in the off season together?

Yeah we do actually. So usually we go back to our home town in Canton. For the most part we skate together, workout together all the time. We’ll go to camps in the summer. Sometimes we find our way back to Minnesota doing the same thing. We’re two peas in a pod. We follow each other around, we’re always attached. We’re honestly like best friends. We do everything together, whether its hockey involved or not, we’re always together.

Do you get pretty competitive with him?

You were selected very high in the OHL draft to the Plymouth Whalers going 16th overall. Did you ever have consideration to playing there?

Plymouth’s a great spot. Obviously, recently and historically they’ve developed a lot of great NHL players. Yes, I did take in to consideration for sure actually. It took me awhile to commit to Boston University. I have made that commitment and that’s what I’m going to stick to but Plymouth has always been a consideration. I’ve done the clinics there, I’ve talked to the coaches, it’s a process that I’m going through and if it’s the best decision going forward then I would have absolutely no problem going there. It’s a great spot to be, the coaches are well respected. Yes I did consider Plymouth a lot, I visited there. They are a consideration for the future.

Are you happy with your decision with playing with the Development Program?

Oh yes. I think there’s stepping stones you need to take to get to the NHL and Shattuck was my first one, leaving my hometown and going to Shattuck, and I took the most of the opportunity and the NTDP is remarkable for the things it’s done for me. My coach especially, Don Granato, the staff coach for him, Mr. Monaghan, all of them. They’ve done way more than I’ve expected. And with all the opportunities that they give you, whether in the weight room, on the ice and any other types of experiences that we gain from them, its all for the positive. I can never say I regret coming here. It’s one of the best places I’ve been.

Explain why you chose Boston University

To start off, I went to Shattuck in the 8th grade. I kinda wanted to stay closer to home, even though Boston is 6 hours away is a little bit closer than 24, right? That was one of them. I wanted to stay on the East Coast, also Boston is a great city. Its a great environment to be in. Specifically with B.U. they have great hockey facilities, great schooling. I actually want to go into the business program there, they have a great business program. Honestly they have coaches that are highly respected. Especially Coach Quinn, he’s coached at a professional level (Assistant Coach for Colorado Avalanche) and now he’s just made a commitment to coach at Boston University, its an honour to play for him. It was just the best place for me to develop as much as I can.

You play against a lot of different levels of competition playing for the Development Team, USHL, International and D1, what level do you enjoy playing against the most?

Yeah, my ultimate goal coming in here was to win the U18 World Championship. For the most part, going overseas and playing other countries, its a different experience to playing Division 1, or USHL. Representing you country really comes out playing internationally, and ultimately its our main goal to be as successful as we can internationally and represent our country to the fullest. For the most part I would say international. Its a great experience going over to these other countries where I’ve never been to before and get to play the game that I love

How would you describe yourself as a player?

I’m hands down a power forward. It obviously helps that I’m 6’5, I’m bigger than most. I think over all I find a way to create space for myself by finishing checks and getting the puck to the net and so forth. I think overall the base of my game is hashmarks down to the net and in front of the net. Mainly it’s using my strength, my reach, and my physical attributes to play the game and posses the puck and be in that presence all the time.It definitely helps being bigger than everyone else. It’s a big factor

What has been the difference between playing for the USNDT this year and last year?

I think last year was more of an experience gainer. I didn’t think I had as many expectations last year. We came into the USHL, all of us are under the age of 17 and the average age in the USHL is a lot higher. This year is different, cause we’ve already had the experience one year. So this year I think there’s higher expectations and we look to have a wining record unlike last year. I think most people expect us to have a losing record when this year we’ve got to win every game that we can. There’s high expectations and we have to get it done.

What areas are you looking to improve on?

The thing that I have to work on the most is my consistency. Having an impact on the game every day., each period and breaking it down to each shift. Consistency is the main thing I need to work on. I think I’ve found a routine to follow to help with that. Everything can still get better, my shot, my skating, hands passing, everything like that. But the main thing I have to focus on is consistency.

2016 NHL Draft: Adam Fox From Long Island to the NTDP and Beyond