QUE #19 C Etchegary, Kurt (2013) – Real hard working player. He didn’t really standout offensively but he was in the way, getting involved the whole game. His skating looked average, where he had good speed but not quite enough to create anything offensively. He showed confidence on a 2 on 1 situation with Erne by his side and opted for a wrister that went in for his first goal of the game…

[sociallocker]goalie Gibson was down on his knees pretty quick). He has very average skills with the puck and will rely more on puck protection than his hands to move the puck around. Playing with skilled players, he does the right things the right way to get his share of points and be effective. I think overall he had a good game, but didn’t show enough abilities to say he should get drafted. It should be noted that Etchegary is playing with an injury that will require surgery in the near future that will put him out for a long period of time.

QUE #10 LW Duclair, Anthony (2013) –Didn’t really standout to me despite the three goals. Duclair struggled with his speed early in the game and never really adjusted. He had trouble with his puck reception at high speed and was poke checked a lot. We only got to see him once or twice going full speed on his wing and creating a direct chance to the net. So he was far off from his own standards in term of impacting the game with his speed. He still got the hat trick with two easy tap-ins and a wrap-around from behind the net. He was positioned perfectly for his first goal in a 2 on 1 situation. He also did a good job using his speed to come out of a corner in the offensive zone and crashed to the net, thus creating some scoring chances. I also liked how he managed the puck in periphery in the offensive zone and how he was able to spot teammates. This showed to me he had good vision and was also comfortable passing the puck. His best offensive sequence to me came late into the game when he went from his own zone to the offensive zone with blazing speed and cut right through the middle at the last second to get the defender away. He looks like a wide-receiver in football out there when making his cuts to get open. Other than that, he didn’t really standout in terms of physical implication and battles. Had a couple fights for the puck here and there and one or two hits, but I’ve see higher commitment from him previously.

QUE #25 C Grigorenko, Mikhail (Buffalo Sabres Prospect) – Looked like the same old Grigorenko from last year out there. He was floating around and looked flat. Gave the puck away a few times in the neutral zone and didn’t generate anything with his speed. He did some good things in the offensive zone with his excellent hands. Extremely good wrist shot on his goal. Overall, I thought he didn’t have a good complete game but he was able to compensate with his skills in the offensive zone to get his name on the scoreboard.

QUE #27 C Shea, Brandon (2013) – Shea played an honest game. He did a good job using his size and long reach to play defense and cut passes. He doesn’t have a great explosion but skates pretty well in straight lines. This last point made him easy to defend as he didn’t show any creativity to elude himself either. I wouldn’t say it was a negative outing for him, but it wasn’t positive either.

QUE #73 RW Erne, Adam (2013) – He was simply the best player on the ice. He just showed an ever better version of the player he was last year. His skating is heavy and he’s hard to move but it doesn’t prevent him from going fast. He showed very good explosion and used his speed all night long to get things going in the neutral zone and to go around defenseman. He displayed the same intelligence on the ice as last year, where he takes the right decision, whether it’s shooting, passing or dumping the puck. On one occasion he drew all three forwards on him going at high speed in the neutral zone and was able to pass the puck at the last second to his teammate standing alone by his side. He also looks far more comfortable with the puck and he uses his hands a lot more to go with his speed. His variety of movement with the puck makes him much harder predict. I also liked how hard he plays without the puck. He gave some solid hits and one that was devastating late in the game. He also showed his real heavy shot even though he only got one goal in the game.

QUE #94 W Sorensen, Nick (2013) – Played an OK game. I love his skating, it’s just flowing nicely and he can move fast. Did a great job on Erne’s fist goal passing the puck; fantastic play by both of them on a 2 on 1. It seems that the puck didn’t “bounce” for him in this game. He showed good effort and involvement to get the puck but he didn’t get many chances to showcase his abilities and speed on the rush. But when he had the occasion, he did well. I thought he was bounced around a little along the boards and he needs to be more aggressive and also lower himself when working in corners. It will help him win more battles even though he’s not very strong. Based on this game alone, his wrist shot seemed a little weak but accurate. One thing I also noticed is how he tried a lot of “set” plays on the power play without looking if his option was open. It seems that he just assumed his player was at a certain place when he wasn’t. Will have to look into that more to see if it’s a trend or just some occasional mistakes that he made tonight.

CHI #17 LW Tremblay, Simon (2013) – I barely noticed him and had to look closely to find him on the ice. He plays a simplistic game and is used as a grinder. It looks like he hustles but he was caught up by the speed most of the time and he wasn’t able to hit his opponents. He took a couple of quick shots on goal, but nothing dangerous. I saw him holding the puck for a longer period of time only once at the beginning of the game and he ended up losing the puck to a defender in the offensive zone.

CHI #27 C Dauphin, Laurent (2013) – First time I noticed him was in the third period when he was coming down the wing with good speed and passed the defender with a great move that left his opponent wondering what just happened. He seems to have excellent hands to go with good speed. He ended up playing a good third period with more confidence and got two assists. Looking forward to see if he can create more of those chances throughout a whole game.

The game started a little slow and neither team was able to move the puck from their zone. Quebec’s talented group of forward started to pace the game up and was able to get the lead halfway through the first period. They didn’t look back after that. The game finished 9 to 4 in favor of Quebec. Chicoutimi’s very thin defense and Quebec’s lethal offense was an equation for horror for the visiting team. Chicoutimi tried a comeback in the third period when it was 8-2, but it was too late. Adam Erne impressed me big time with a complete package that he was able to use throughout the whole game to mess with Chicoutimi’s defense. His combo of speed, quick hands and physical ability was just awesome to watch. Duclair showed his huge potential with his 3 goals despite a bad game. He was dangerous in the offensive zone and he barely used his speed. That goes to show he can do a lot more and I’m looking forward to that. Sorensen left me with the thought of wanting to see more out of him. He did some nice things but looked sluggish at times. I still liked the implication even though things were not turning his way tonight. Etchegary had a good game but I’m not sure he showed enough upside to be considered for the draft. Brandon Shea has the physical tools and hockey sense to play the game at a higher level. But he didn’t show he had the speed to do it and the offensive abilities to be a premium player either. I could see him getting drafted if he brings a little more tempo to the game than he did tonight. I’d like to see him hustle more with the two-way style that he’s trying to play. Chicoutimi’s players were barely noticeable except for Laurent Dauphin who played fairly good in the third period and showed good things. Simon Tremblay as a bottom line player didn’t do enough applying pressure and using his body. He needs a little more speed to do it against a team like Quebec. 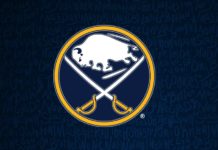